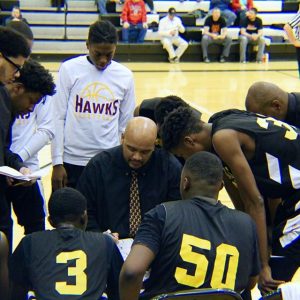 Robert Tate was hired as Head Boys Basketball coach at Horizon Science Academy in 2014 after a three-year stint as Head Girls Coach at Horizon Science. Creating a basketball community at Horizon Science Academy has been the goal for Coach Tate since he started coaching at the school in 2010.Coach Tate takes his job as a coach very seriously. He is a member of the National Association of Basketball Coaches and the Ohio High School Basketball Coaches Association. This year, Mr. Tate was promoted to the role of Assistant Principal of School Culture. He hopes this new position will help mold the students into becoming responsible adults that hold themselves accountable for their actions. Coach Tate achieved his Bachelor’s degree from Union Institute and has two Master’s degrees from Grand Canyon University. He currently resides in Reynoldsburg, Ohio but was raised in Zanesville, Ohio. He has two sons Kevin and Keenan. He also has a handsome grandson named Mathias.